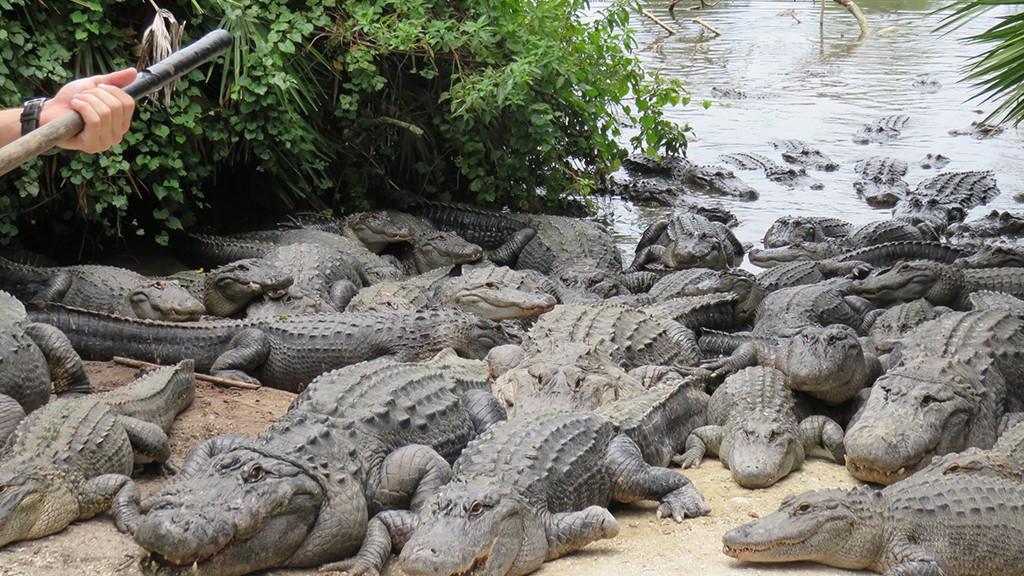 For our family road trip we travelled to Orlando, Florida and went to a gator theme park called Gatorland. As we reached there you can see that there were huge birds that were black or white. The tickets were at a reasonable price but, I surely recommend getting the AAA discount. Once we got our tickets we saw our first alligator there, it was a medium sized guy and it was also sleeping.

There was a huge habitat that hold both crocs and gators with a small sand bar in the middle. We did not notice at first but in the water were fish that we believed were food for the gators and crocs. We even saw a fish food dispenser to feed the fish with pellets only for a quarter. In the middle, were baby crocs and gators. A staff woman was holding a baby gator that you can touch for free and it is so cute.


After we ate, we went to this show called, Gator Wrestling Show. There were two guys, the first one grabbed a Gator by the tail out of the water and told us how the gator eyes can pop in and out. Then he did crazy tricks where he put his chin on top of the gators mouth. His partner began to sing putting the gator to sleep and the 1st guy started tickling the Gator. The gator woke up and went back to the water and that ended the show.
At 1:00 we went to the breeding marsh where they have the biggest gators and by the way there are no crocs there. There was a way to get out but it was only a gate so if you go inside there there is a chance you will get eaten but, luckily there was staff there. For only $10 you can feed them there because behind the gate in the Breeding marsh there was land where the biggest gators wait to get fed. Once you pay you can feed them three pieces of horse meat and also get your picture really scary close to them for more money.
We went to see another show which is called,the Jumparoo Show which is where we saw gators and crocs jump trying to get chicken meat. Later in the show the performers got the chicken meat and made the gators and crocs jump and try taking it from their hand. Then we got 4 hotdogs which you can give to the gators but, be careful the birds might steal it from you and the fish. There is also flamingos where the feeding is if you want to feed them by paying for flamingo pellets.
Later in the afternoon, we went zip lining over the breeding marsh for only $10 and get to feel the experience of gators underneath us. I went first out of my family and was surprised when we had to fall backwards then it moved me over the swamp and I saw gators in the waters. It was so thrilling how I was so close to the breeding marsh because it is actually not a man made swamp.

If it was up to me I will rather go to Gatorland than Disney World and would give Gatorland 4 and a half stars. There is 3 awesome qualities there, it is natural, thrilling, and educational.

Ace is a 11 year old blogger who loves pizza and Dr. Who. He loves family time at home which can be anything from playing card games to watching a rented movie. An avid reader he also enjoys basketball and football, but sometimes forced to play baseball.


Warning: count(): Parameter must be an array or an object that implements Countable in /homepages/22/d157926273/htdocs/boredfamilies/wp-includes/class-wp-comment-query.php on line 405